A few months ago, Raymond Chen wrote about an obscure “feature” in Windows that makes Task Manager’s titlebar, menus, and tabs disappear, with no apparent way to ever get them back. This is called Tiny Footprint mode, and Raymond described it as

… one of those geek features that has created more problems than it solved. Sure, the geeks get their cute little CPU meter in the corner, but for each geek that does this, there are thousands of normal users who accidentally go into Tiny mode and can’t figure out how to get back.

The fortunate may find Microsoft’s Knowledge Base Article describing this mode and how to get out of it. Others are not so fortunate. One of Raymond’s commenters spent three days running antivirus software trying to find the problem. Another gave up and reinstalled Windows from scratch!

Well, after seeing all those complaints, I stayed far away from Tiny Footprint mode and didn’t give it a second thought.

Until one day, when I was working on a bug and I wanted to watch Acrobat’s memory allocation and GDI and USER handles. I was getting really annoyed with how much screen space the Task Manager was taking up. It’s odd that Task Manager has such a large minimum window size.

Then I remembered Raymond’s article and gave it a shot. I double-clicked in the whitespace in Task Manager’s window, and not only did the title and menu bars go away (which I didn’t care about one way or the other), but I could resize the window as small as I wanted! 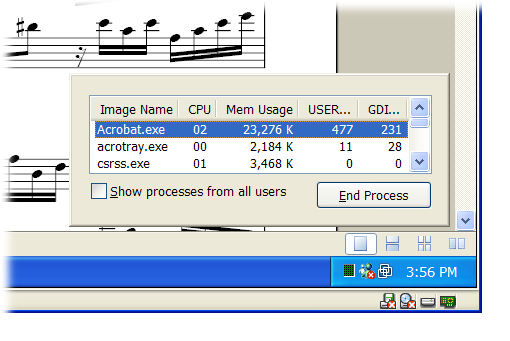 Now I use this mode all the time. Task Manager is a lot more useful when it can target just the information I want instead of taking up a big chunk of my screen.

It is unfortunate that there’s no easily discoverable way to get back out of this mode, but once you know that it just takes a double-click, there’s no real problem at all.

Weird task manager Have you ever got stuck with a task manager that looks like this? There’s no obvious way to get out of this mode? Sure there is. Just double click the gray area surrounding the list, and it will transform back to the regular design. Now, why on earth…