Where Do You Vote?

AnnoTube is a jQuery plugin that makes it easy to embed a YouTube video in your page along with an index and notes that are displayed and synchronized with the video as it plays. Each note can be an HTML snippet, or a URL to be loaded into an IFRAME, or even a JavaScript function to be run when a specific time in the video is reached.

Here’s a demo: the Mapping the Votes talk I gave at Google in April, with annotations provided by AnnoTube. This solves a mistake I made in this talk: Like many speakers, I left the text too small in my code examples. It looked fine to the people in the room, but the code is really hard to read in the YouTube video. But with the annotations I can put big, readable text right next to the video at the right time.

Fair warning: At this moment, I’ve only annotated the first 15 minutes of the video, and all of the notes so far are actually web pages in an IFRAME. Also, the AnnoTube plugin itself isn’t quite ready for general use. This is all a bit of work in progress, which started with something I put together for fun during the Google I/O conference. I’m only posting now because the YouTube API team is mentioning it in a post of their own, so please watch this page for updates over the next few days.

For a start, here’s what the timeline for my talk looks like (with URLs shortened to avoid long lines):

As you can see, it’s just a simple list of times, titles, and links or HTML snippets. AnnoTube takes care of connecting the events and watching for the times you specify.

More details soon… Thanks for your interest and patience!

Another day, another primary, another Google map. This time we added a bunch of demographic information using little sparkline graphs, with help from Jim Barnes of the National Journal. I think the voter registration by age is especially interesting. Check it out:

(The map probably won’t load in an RSS feed, so click through to the article to see it.)

You can get this map for your own site!

I was chasing down a bizarre bug. My JavaScript code was working fine in IE, Firefox, and Safari, until I tried using it here on mg.to. It still worked in Firefox and Safari, but it blew up in IE, with behavior that made no sense at all. I was seeing duplicate copies of DOM elements I created using my DOM creation plugin for jQuery, and all kinds of strange behavior. It was almost as if something was fundamentally wrong with the way the DOM was working.

I’m usually pretty good at tracking down problems, but this one had me stumped. I wanted to look around the the DOM structure, but since this was IE, I couldn’t use any of the usual Firefox plugins such as the DOM Inspector or FireBug. Then I found a great tool for IE troubleshooting, the DebugBar.

I looked at the DOM with the DebugBar, and my jaw dropped when I saw this: 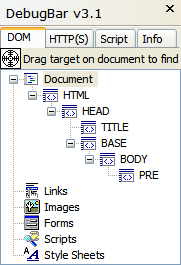 (This screen shot and the others below are from simplified test cases.)

This had to be impossible! The document <body> was inside the <base> tag, which in turn was inside the <head>. The latter I’d expect, but why was <body> not a sibling of <head> as it should be? And how was <base> involved in this?

I got lucky with some searches and found these articles by Justin Rogers from the IE team:

This part of the “Implied tags” article seemed to explain what was going on:

The set of implied rules has impacts in other areas as well. You can, for instance, end up using document.writeln to prematurely terminate your HEAD element and move a bunch of stuff out into the BODY. So, if you are doing inline document writes you should probably do them where you want the content to go. Writing the content out in script blocks that appear in the head is the wrong way to go about it. You could hook up to some events or have a container element that you write into, and that is acceptable, but with inline writes you could get unexpected behavior.

Recently I noticed a site that was doing a document.writeln in their HEAD element about half-way through the head content. End result? Well, the content got moved into the BODY element and the object model tree for the page was completely wrong. Good thing they weren’t navigating the object model looking for stuff and good thing the extra META/LINK elements weren’t being used as well. With a static parse of the page you wouldn’t even notice these problems, but when DHTML becomes involved it can change the structure of your document on the fly and rewrite what the object model tree looks like.

Indeed, this site runs on Drupal, and Drupal 4.6.x does use a <base> tag. (The forthcoming Drupal 4.7 eliminates the <base> tag.)

Justin’s examples showed an unclosed <base> tag like this:

That should be OK; the W3C HTML specification defines the BASE element as EMPTY, so it shouldn’t require any kind of closing tag (except for XHTML compatibility).

The <base> tag that Drupal generates is self-closing in the XHTML style:

However, IE6 does not seem to recognize that the tag is closed (or EMPTY), and it puts everything after that inside the BASE element.

(You may also notice that strictly speaking, Drupal’s <base> tag is incorrect. It should include a filename, but it seems to work OK without it—except for the IE problem.)

On a hunch, I tried closing the tag the old fashioned way:

and presto! Everything started working, and DebugBar revealed that the <head> and <body> elements were siblings, both direct children of <html> as expected.

The bottom line: Every HTML document in the world that uses a <base> tag is being parsed in this odd way by IE, unless an explicit closing </base> tag is used. It doesn’t affect ordinary HTML rendering, but any kind of DOM manipulation may go haywire.

Here are the three test cases. First, the unclosed/empty <base> tag: 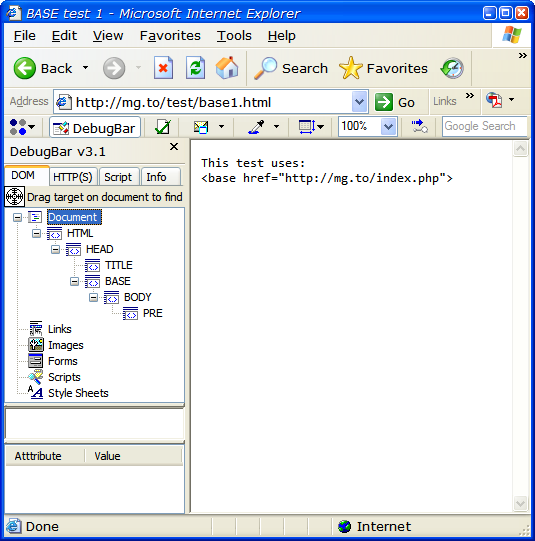 The XHTML-style <base /> tag is no better: 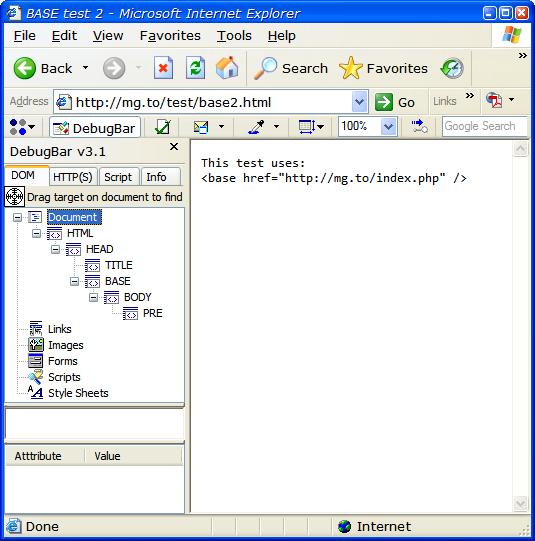 And the one that works, with a closing </base> tag: 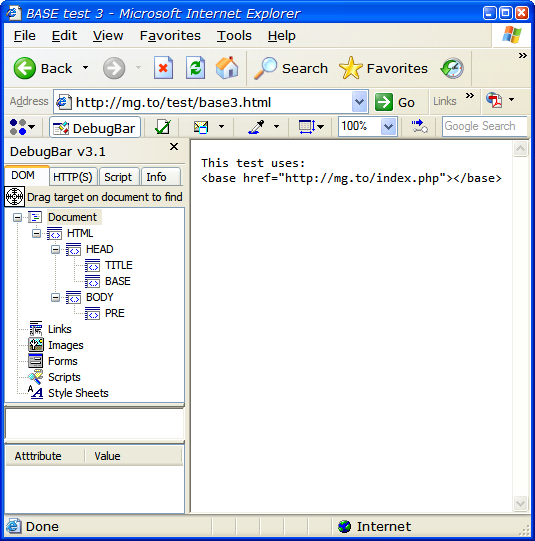 There is one remaining problem. If you validate your pages as HTML 4.01 Transitional, there is no way to use a <base> tag that works correctly in IE and also validates. The validator barfs on the closing </base> tag, because it figures the tag is already closed (being an EMPTY element).

If you use XHTML 1.0 (either Transitional or Strict), then you can use the closing </base> tag and it will validate. Since most people who validate their pages are probably using XHTML anyway, this shouldn’t be a problem for many.

However, the W3C’s XHTML/HTML Compatibility Guidelines offer this warning:

…use the minimized tag syntax for empty elements, e.g. <br />, as the alternative syntax <br></br> allowed by XML gives uncertain results in many existing user agents.

Well, that’s just great. The only syntax that works in IE and validates is <base></base>, but W3C warns against it. I haven’t actually seen any problems caused by using this syntax with the <base> tag, though, even in old browsers. So for now, I’m using it and hoping for the best.

Major thanks are due to the DebugBar for pointing me toward the problem, and Justin Rogers for explaining it.