Have you ever wanted to use the mouse to move something with pixel perfect precision? There is a way to do it: a “keyboard mouse.” One good one comes with Windows, called MouseKeys. If you’re using a desktop computer with a dedicated numeric keypad, you can turn on MouseKeys and leave it on, then use the numeric pad to move the mouse in any direction one pixel at a time.

Unfortunately, MouseKeys is barely usable on a notebook computer. You can get it to work, but you’ll have to turn it on and off all the time because it prevents normal use of the keyboard—the “numeric pad” on my ThinkPads and on most other notebooks is overlaid on the QWERTY keyboard.

So I wrote JKLmouse, the automatic keyboard mouse for notebook and laptop computers. JKLmouse doesn’t use any special modes—it is always active—and it doesn’t interfere with normal use of the keyboard.

The secret is simple: JKLmouse turns keyboard keys into mouse movement keys only while a mouse button is held down. When no mouse button is down, the keyboard works normally. When any mouse button is down, you can use the cursor arrow keys to move the mouse, and you can also use keys on and around the home row: JKL for the right hand or SDF for the left, along with the keys above and below those.

This works especially well on a ThinkPad, where the TrackPoint is also right next to the home row. You can start moving something with the TrackPoint, then continue to hold the mouse button down and use JKL and nearby keys to move the last few pixels, one pixel at a time. There’s no special “keyboard mouse” mode—you can combine TrackPoint and keyboard movement seamlessly. It also works fine with touchpads—just keep the mouse button down and you can use either the touchpad or the JKLmouse keys.

What if you want to use JKLmouse without holding a mouse key down? Hold down the Caps Lock key and you can use all of the JKLmouse keys while Caps Lock is held down. This won’t turn on the Caps Lock mode and doesn’t interfere with normal use of Caps Lock.

I wrote JKLmouse for my own use because I wanted a keyboard mouse that Just Works on my ThinkPad, without the special modes that other keyboard mice use. I’ve found it tremendously useful and I hope you enjoy it too. 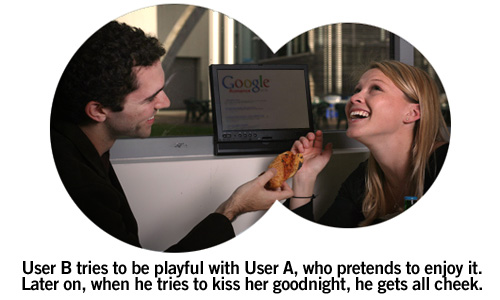 Why I love the TrackPoint

Ten years ago, when Windows 95 first supported multiple pointing devices, I tried an experiment: I set up three different pointing devices so I could switch back and forth among them and see which I liked. I already had a mouse, of course, so I bought a new IBM keyboard with a TrackPoint built into it, and a touchpad which I placed below the space bar. 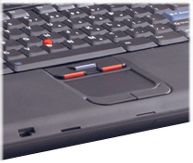 Essentially I had the same layout as IBM’s more recent UltraNav, plus a mouse.

At first, the TrackPoint felt a bit odd and hard to control, while the touchpad was easy to get used to. But after spending the money on that keyboard, I made myself use the TrackPoint for a few days… and then it clicked.

Once I got used to it, the TrackPoint became so natural that I wasn’t aware of using it. If I wanted the mouse pointer to go somewhere on the screen, it would just go there. I didn’t think about taking my hand off the keyboard, reaching over for the mouse, and then moving it. The mouse pointer would just go, seemingly because I willed it.

I was visiting a friend some time later and sat down to use their computer, and I started getting flustered because the mouse pointer wasn’t moving where I wanted it. In fact, it wasn’t moving at all, and I couldn’t figure out why. Why wouldn’t it just go like it usually did?

Then I looked down and saw my index finger moving around, trying to push on a TrackPoint that wasn’t there.

Because the TrackPoint is available in the touch typist’s home row position, it removes the barrier between pointing and typing. Consider how you operate a context menu: You can right-click with the mouse, move the mouse to the desired menu item, and click it. Or if you’re a real geek, you may know that you can type Shift+F10 to open the context menu, then press a shortcut letter or the cursor keys and Enter.

What you’re unlikely to do is combine these two modes of operation. You probably won’t right-click and then type a shortcut letter even though that can be very convenient. But with a TrackPoint, mixing the keyboard and mouse are perfectly natural. I often right-click and then type a shortcut letter, or mix up the mouse and keyboard in other ways. I’m never in “typing mode” or “pointing mode” like I would be with a mouse or touchpad.

If the TrackPoint is such hot stuff, why isn’t it more popular? You’ve got IBM/Lenovo, Motion Computing, sometimes Toshiba and Dell, and who else? Every other notebook has a touchpad.

Matt from the ThinkPad mailing list found this out the hard way: Do not install the latest Embedded Controller Update on your ThinkPad if you have a non-IBM replacement battery, or your machine will no longer work on battery power. This new firmware update checks the battery status in a way that fails with non-IBM batteries.

The version number for the bad update varies for different models, but check the release notes for a phrase like “Enhancement of the battery control.”

The problem affects at least the A30/A30p and A31/A31p models, and possibly others.

Adding insult to injury, the way to fix the problem is to downgrade to the previous version of the Embedded Controller firmware, but you to do this, you need:

I’m a huge ThinkPad fan; I just hope this battery incompatibility is an inadvertent bug and that IBM will fix it quickly.

Following up on his Windows XP SP2 report, John Levanger explains how they get wireless Internet in the Afghan desert:

Technology has changed the way we do business in the military. It does seem somewhat bizarre to have unfettered internet access in the middle of nowhere. I can sit in my tent with my ThinkPad and email, IM, and browse the internet the same as if I was sitting in my living room back in Georgia. Myself and 39 other buddies purchased a satellite system from an outfit out of India. The ISP is actually in Germany and we get just about T1 bandwidth which is split up 40 ways if everyone is on (which doesn’t occur due to different work shifts). We “beam” it out via Wi-Fi to the different tents. Even our aircraft (I’m in a CH-47 Chinook unit) are on an intranet of sorts. The system called Blue Force Tracker allows secure tracking of all the different aircraft (and ground elements) within the theater real time. We can email between aircraft and to our headquarters during flight…all with satellite technology. I’ve hardly sent a snail mail letter since I’ve been here. SSG John Levanger Taskforce Diamondhead Kandahar, Afghanistan “People sleep comfortably at night in their beds only because rough men stand ready to do violence in their behalf”.

Just your everyday XP SP2 installation report. Be sure to read to the end…